In this riotous farce Philip Conway is attending a political conference, but his campaign to be Party leader is in serious danger of collapse.
Visits from rivals, fellow conspirators and the all-too-attentive Vicki coincide rather unfortunately as political plans go hilariously awry.
"Up and Coming" keeps one question tantalizing unanswered until the very end; who will get his, or her, just desserts. 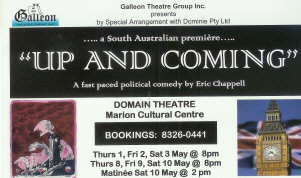 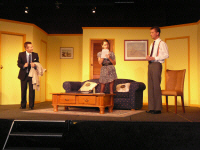 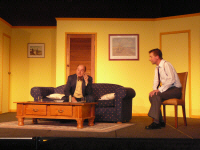 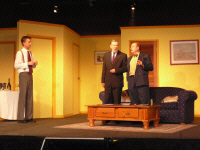 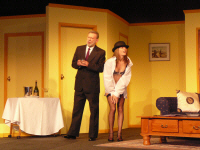 Director Kym Clayton assembled a fine cast to deliver another of Eric Chappell's witty scripts. On a well designed set the action unfolds with remarkable speed in a well put together production.
Andrew Clark is the epitome of a careful politician as he brings Phillip Conway, Deputy Prime Minister to life. With backdrop of a party conference the machinations of party politics, divided loyalties and temptation of the fairer sex take their toll.
All of the characters are believable, maybe the secretary, Alison Bowman, and the devotee, Naomi Martin were a little overdone, but Jack Robins as the sly Reynolds was spot on. The ever reliable John Matsen gave Higgs, the security guard, just the right amount of diffidence and Jeff Phillips as Henderson, the Prime Minister, was controlled and careful, just as he should be.
As Berryman, the has-been drunken rival to Conway, Ian Rigney put in a great performance, brightening the stage every time he came on, easily gaining the most laughs for the evening.
On opening night this production was well rehearsed and polished, but a little tense resulting in the laughs being only titters. I am sure as they settled into the season and relaxed a little, the cast gleaned the laughs that they and the script deserved.
Reviewed by Fran Edwards 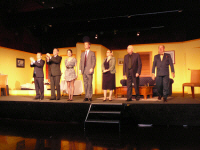 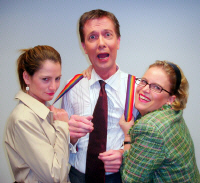