Time of My Life

When eating out, why is it that the next table's conversation is often so much more fascinating and intriguing?
It is Laura Stratton's fifty-fourth birthday. She is out for the evening to celebrate at her favourite local restaurant. The other guests include her businessman husband, Gerry, her two sons, Glyn and Adam, Glyn's wife Stephanie and Adam's new girlfriend, Maureen.
Three couples celebrating a happy family outing. Yet is it all harmonious as it appears? What secrets lie buried in past? What hidden tensions lurk beneath the surface? What awaits them all in the future? What do the waiters make of it all?
Alan Ayckbourn's bitter sweet comedy, Time of My Life, explores the family's lives, past, present and future, in a three way journey through time. Adam and Maureen work their way back through time to their first meeting. Glyn and Steph move forward to their respective futures while these shifts in time are counterbalanced by Gerry and Laura living through real time following their meal. All of them are in search of personal happiness but, as is so often the case, hard pressed to recognise it even when they find it. 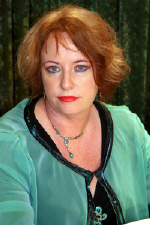 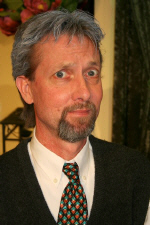 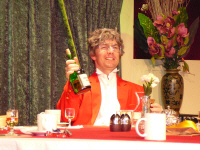 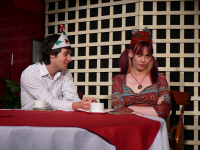 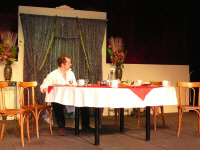 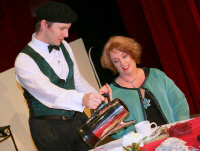 Tales of dysfunctional families are not new. The Addams family and the Simpsons took US television by storm. Then there were the Braithwaites in the UK, the Flodders in the Netherlands and the Bullpitts in Australia.
Now thanks to Alan Ayckbourn and Galleon Theatre we have the Strattons, an upper class family of misfits who have gathered at their favourite restaurant for Laura Stratton's 54th birthday. This is classic Ayckbourn as he slices a knife through the veneer of a family celebration to reveal the inner, not always attractive, workings.
Director Kym Clayton has delivered the goods with a rich script, strong cast and cabaret style seating that adds to the atmosphere of the restaurant set.
Joanne St Clair is pivotal in her role as the self-centred snob Laura Stratton, who candidly and thoughtlessly reflects on her life, family and marriage. Andrew Clark is satisfying as her bountiful and forbearing husband Gerry, and Simon Hanna is appropriately engaging and easily led as the favoured son, Adam.
Victoria Morton is the shrewd and sardonic daughter-in-law, Stephanie, providing, as an outsider, gratifying insights into the Stratton family dynamics. Her husband Glyn, portrayed with acuity by Christopher Eaton, struggles to earn the love of his mother and fails to impress his wife with his behaviour.
Comic relief comes in the form of the son's girlfriend, Maureen, portrayed with relish by Nikki Gaertner. It is obvious from the moment the spotlight hits her costume that this is a young woman who is loud, gaudy and not in the same class stratosphere as the Strattons. And so the fun begins. Gaertner is delightful as the girlish gold-digger, clearly out of her league when it comes to her future mother-in-law!
Anthony Clapp also has fun and lightning quick costume changes as he presents five different caricatures of waiters.
The cut and thrust of Stratton family politics is at the centre of this play, as it flashes back and forth in time depicting cameo scenes at restaurant tables. This is a poignant yet very funny show.
Reviewed by Stephanie Johnson

Alan Ayckbourn manages once again to get under the skin of all his characters in this fascinating dissection of family life. With husband Gerry, Laura is celebrating her birthday at 'Essa de Calvi' their favourite restaurant. Also along are eldest son Glynn, his wife Stephanie and younger son Adam with his fiancee Maureen.
The dinner is hardly a sparkling success, and in subsequent scenes, playing with the time lines Laura and Gerry remain in the present whilst Glynn and Stephanie progress to the future and Adam and Maureen regress back in time until their first meeting.
Director Kym Clayton achieved a very high standard with this production. The action flowed beautifully and the unpleasant emotional passions were adroitly broken up by the clever comic relief provided by the waiters.
Joanne St Clair gave a brilliant and perceptive performance as the not very nice Laura; Andrew Clarke was excellent, vigorous and dominant as her husband Gerry.
Christopher Eaton has definitely made the transition from musical theatre to drama - he was cool and very natural as Glynn. Victoria Morton's return to the stage is a bonus for theatre with her sensitive, intuitive portrayal of Stephanie.
First timer Simon Hanna was splendid and showed empathy for his character Adam and Nikki Gaertner had loads of fun with the spiky off-beat but insecure role of Maureen.
Anthony Clapp was perfectly wonderful playing all five of the waiters with skill and flair; he displayed a remarkable knack for making just the right amount of disruption to the main action.
The set designed and constructed by Bruce Mildren was simple and elegant, a fine restaurant with a large centre table, flanked by two smaller tables for the past and future scenarios.
Notably considerable attention to detail had also been taken with props and costumes which made this into a very stylish and well-crafted production.
Reviewed by Laraine Ball 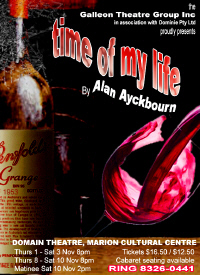