Cantankerous, world-weary and generally grumpy... think of an adjective synonymous with 'crabby' and it will apply to Stephen Febble. All he wants is a quiet life but, to his horror, his long-suffering wife Virginia fills the house with guests for the weekend. Not only do his daughter, gormless son-in-law, precocious grand-daughter and incontinent dog arrive, but his best friend, his wife and her smooth chiropodist lover turn up for dinner. Exasperated, frustrated and irritated, Stephen responds in his normal fashion by reaching for the whisky (in large amounts) and for the sarcasm (in even larger amounts).

Despite this, though (or perhaps because of it), there's lots of laughter and writer Michael Palin has given us lots to laugh at. But it's also a play with more than a thread of black as well as light humour, and a play with surprising revelations of emotion, as well as farce. In short, The Weekend provides straight comedic entertainment in buckets, but there's also a poignancy that gives the script depth. 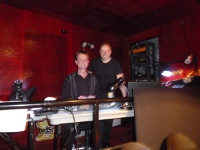 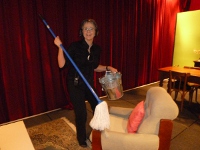 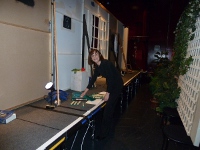 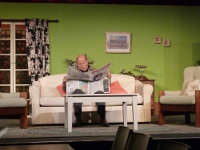 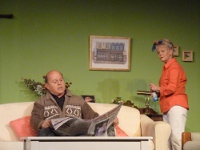 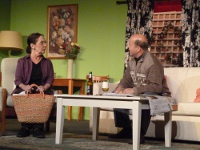 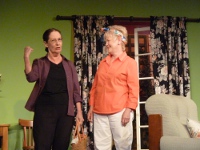 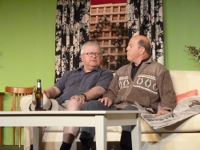 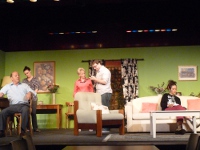 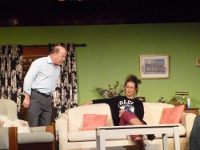 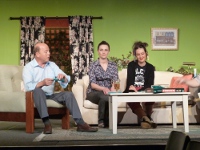 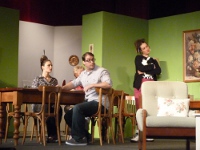 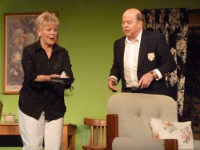 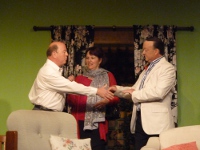 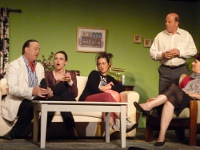 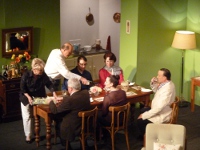 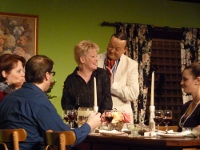 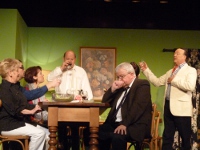 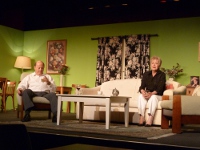 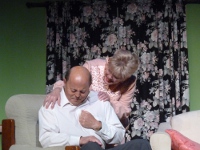 Written by Michael Palin, of Monty Python fame, this script promises more than it delivers, and this reviewer isn't sure why.
On the usual well-planned and well-constructed, immaculate Galleon set, Kym Clayton has directed the cast of nine with skill. The stage never looks over-crowded despite the full cast having numerous entrances and exits. The pace is good and the comedy well played but this reviewer, whilst enjoying the overall production, was left feeling vaguely let down - and the problem may just be in the script.
Peter Smith is excellent as Stephen Feeble, the main character, very much the grumpy old man, who is irritated by the world and everything in it. His long suffering wife, Virginia, is played, with patience, by Lesley Reed, who is the perfect foil for Smith. They both have the character depth required and are totally believable.
Their weekend visitors, who cause Stephen's irritations to boil over, are a mixed bunch. Pat Vice gives us a cameo of the cleaning lady, Mrs Finlay, with an Irish accent and enough annoyance to light the fuse for the later explosion. The Feeble's daughter Diana is played by Olivia Eblen, with sufficient sadness that she annoys Stephen just as much by not talking as the cleaner does with her chatter.
With Diana comes her husband Alan (Luke Budgen), daughter Charlotte (Elysia Boyd) and the bane of Stephen's life, their dog (mostly unseen). Boyd plays the typical teenager, designed to annoy and inflame any situation, while Budgen's Alan is garrulous, reasonable and almost likeable.
The other visitors are their old friends Duff (David Lockwood) and his wife Bridget (Vicky Horwood) who may, according to gossip, be experiencing marital problems. Lockwood is well cast as the dependable, likeable Duff, who seems unflappable, and Horwood is strong as the wife who has a questionable relationship with her podiatrist. As said podiatrist Warren McKenzie is oily and suitably unsettling. This production is another quality offering from Galleon despite this reviewer's misgivings.
Reviewed by Fran Edwards

Galleon Theatre's comedy "The Weekend", penned by Monty Python's Michael Palin, wholeheartedly delights, owing much to Kym Clayton's astute direction.
This, because, he's drawn a magnificent performance from Peter Smith as a cantankerously, opinionated, but deliciously hilarious modern day Alf Garnett, exuding comments from his mouth even before they've formed in his head.
Smith wreaks havoc throughout, especially in Act Two, when he's completely intoxicated. However, Palin has written too many characters that he's unable to satisfy.
Nevertheless, Lesley Reed ensures 'our hero' doesn't dominate completely.
Set and stage management also excel.
At Marion Cultural Centre until November 26th, provided you can find Marion. I always take a sleeping bag, just in case !
Reviewed by John Ovenden November 2011

The Galleon Theatre Group's production of The Weekend by Michael Palin was well suited to the company, cast and the venue, Marion's Domain Theatre.br/ > The action takes place in the home of Stephen and Virginia Febble on a weekend in which their daughter and her family, along with a local couple are visiting. Gradually the various relationships unravel and the characters are confronted with failure and, in some, a degree of self loathing.
Director Kym Clayton brought a crisp treatment to the play, which mixes some genuinely funny lines and situations with the hollowness of the relationships of most of the main characters. The ensemble work was tight and the cast used the broad Domain stage to good effect.
Central to the performance's success was the strength of the characterisation ofPeter Smith (Stephen) and Lesley Reed(Virginia). These experienced actors instantly established the nature of their familiar and routine-driven marriage; he complacently and annoyingly reading the paper and she dutifully dashing about tidying the house and answering the phone whenever it rang. They both have a fine sense of timing and comedy, and frequently displayed that during the play. Later in Act 2, in the critical scene when Stephen finally confronted his own inadequacies and confessed to the lies he'd been living all those years, they drew genuine pathos.
David Lockwood as Duff and Vicky Horwood as Bridget were solid and convincing, while Olivia Eblen as the Febbles' daughter Diana and Luke Budgen as her tediously transport-obsessed husband Alan, succeeded in showing how unsatisfactory their relationship had become. Warren McKenzie brought a studied sleaziness to his role of Bedales.
Although at times the script wasn't as coherent as it could have been, such as when building up to Stephen's confession, the Galleon Theatre Group succeeded admirably in bringing The Weekend to life.
Reviewed by David Smith November 2011 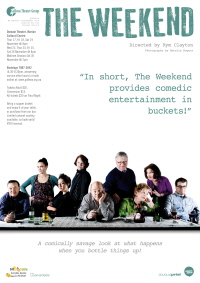 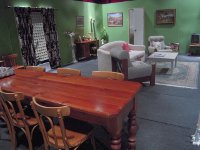