Our homely hero has a problem. He idolizes Humphrey Bogart, but has none of his charm. His friends try to fix him up with beautiful dates, but he's so gauche that they always end abysmally. If only he had some of Bogart's technique! Fact is, he is more like a friendly dog than a hero, and this is what charms his best friend's wife to the point that they spend a night together. Now our hero is in a real mess. It's a tough life, making it in the world of beautiful people, when you yourself are homely, but it is grand fun to follow. 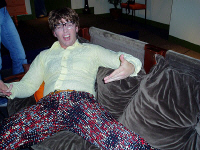 Woody Allen's "Play it Again, Sam" was a hit on Broadway, with Allen himself in the lead role. Allan Felix is feeling down because Nancy, his girlfriend, has left him. His best friend, Dick, and Dick's wife, Linda, decide to help him get out more and meet some women.
First time director, Jerry Zimmer, has done a reasonable job of keeping the action moving, but the pace is variable depending on the experience of the cast members involved in each scene. With a wide variety of experience in the cast, this leads to considerable unevenness. However, Zimmer clearly has a future as a director.
Anthony Clapp, as Allan Felix, maintains both his character and his accent quite well, but is let down a little by a lack of variety in pace. His frenetic scenes are a little subdued, and his calmer ones not calm enough.
Peta Long, as Linda, brings a wealth of experience to the role, in a completely convincing performance. As a result, she also helps to bring out the best in Anthony Clapp, so the scenes they have together in Act II are the best in the show. In two scenes where she plays out different versions of the same scenario, the subtle differences in her performance are brilliant.
Tim Sydenham, as Dick, seems a little uncomfortable with his character at times, but is at his best when he is allowed to let loose, particularly as the fiery Italian lover. When he is playing Dick in the real time scenes, his passion for his work, very evident from the script, is not clear enough in his characterisation.
Amy Hutchinson and Charlie Potter both play a variety of women that Allan comes into contact with and both do well to make each of their characters different from the others, whilst also highlighting some of the similar traits that Allan is clearly attracted to. Jack Robins has a great time in the cameo appearances as Humphrey Bogart.
Cathy Vogelesang's costumes are a wonderful reminder of the seventies and the fashion horrors spawned by that decade.
Ray Trowbridge's lighting is an interesting mix of good ideas, but with some problems in execution, particularly in the scenes representing Allan's memories and dreams.
In the end, this show gives everyone a lot to think about life, love, and relationships.
Reviewed by SIMON SLADE

WOODY Allen's earliest plays, jokes and films are among his funniest material. And from the Take the Money and Run era, Galleon has revived one his best comedies, Play it Again Sam, with great success.
Jerry Zimmer has made a terrific debut as director of this uproarious '70s classic which originally starred Allen himself as anxiety-ridden, Humphrey Bogart-obsessed film critic Allan Felix.
His wife Nancy has walked out on him to find some real excitement and Felix makes every mistake in the little black book while trying to find a replacement.
Anthony Clapp eventually stops trying to impersonate Woody and creates a memorable Felix, who loses most of his dignity, ultimately his inhibitions and even his hair as he realises he has something to offer women. His timing is excellent and he handles the physical business with right amount of well meaning bumbling and manages to garner a garnish of sympathy for frustrated Felix
Tim Sydenham could make much more of the plum role of business obsessed Dick and Peta long is suitably unassuming as his unhappy spouse Linda.
Jack Robins does a more than passable Bogey and should be allowed to lift the hat back off his eyes and deliver a full characterisation.
The other star turns come from two very versatile young women in Amy Hutchinson and Charlie Potter as they appear in a variety of roles as the women who pass in and out the Felix failure radar. They are funny, over-the-top and grist to Allen's comedy mill as they play out his fantasies with often hilarious results.
Stan Fairfield and Max Bowden have done a great job with the set and Cathy Vogelesang has come up with some real '70s classic costumes. This is a polished, funny and entertaining night out, one of Galleon's best efforts for quite a while.
It's a shame the non-munching audience is set so far back from proceedings in this rather bizarre theatrical domain.
Reviewed by Matt Byrne 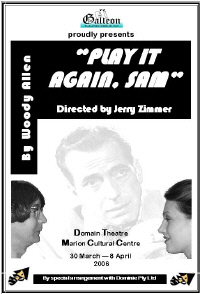 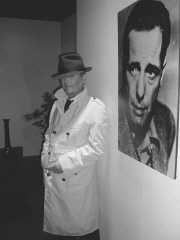