A man wakes up in the bridal suite on his wedding morning to find an extremely attractive naked girl in bed beside him. In the depths of a stag night hangover, he can't even remember meeting her. Before he can get her out, his bride to be arrives to dress for the wedding and, in the ensuing panic, the girl is locked in the bathroom.

The best man is persuaded to claim her, but he gets confused and introduces the chamber maid to the bride as his date. The crisis escalates to nuclear levels by the time the mother of the bride and the best man's actual girlfriend arrive.

This rare combination of riotous farce and touching love story has provoked waves of laughter across Europe and America. 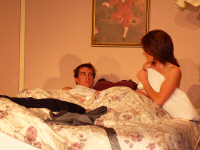 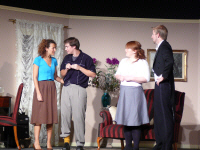 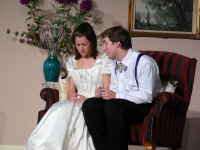 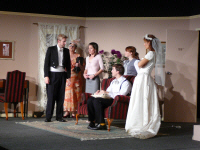 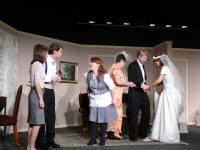 Not often does a director usher patrons to their seats but that is exactly what Kym Clayton does at the Domain Theatre. As the lights dim, "Fever" plays over the PA and the curtains open to reveal a magnificently recreated hotel suite on stage.
On the morning of his wedding, Bill wakes in his own honeymoon suite and finds a naked girl in bed beside him. What's more he can't remember a thing. Rachel, his fiancee is about to arrive at any moment to prepare for their wedding. The ensuing chaos is riotous as Bill aided by his best man Tom, an unwitting chambermaid and the mystery girl attempt to prevent Rachel discovering the truth. The results are fast paced and hilariously complicated.
Luke Budgen as a craven Bill warms into this pivotal role and becomes more comfortable as the lunacy progresses. Naomi Martin is solid as Judy and Dale Hicks is a little stiffly staid as Tom but plays his part well enough. Sharon Pitardi is excellent as Rachel, Wendy Mildren is delightful in the cameo role of the brides mother Daphne and Jamie Hibbert demonstrates tremendously sharp comic timing as she commands the stage as Julie the chambermaid. None of the cast misses a cue as every expression and every joke is delivered in spectacular fashion. It's a comic feeding frenzy as the actors feed off one another.
By now the house clearly loves the pandemonium as it roars with laughter in this most splendid production. The wedding may be imperfect but the cast is wonderful, the set stunning, the direction clean and the plot is enjoyable which overall makes it the perfect recipe for hilarity.
Great fun.
Reviewed by Stephen Davenport

A Farcical tail reminiscent of John Cleese in Faulty Towers, this play tells the story of an unfortunate young groom to be, who wakes up on the morning of his wedding next to the girlfriend of his best man. Pandemonium ensues as the groom, best man, girlfriend and chamber maid try to conceal the truth of the night before.
This is a wonderfully witty script written by Robin Hawdon. The direction by Kym Clayton is very tight and the action is well paced. The production got off to a slow start when Luke Budgen as 'Bill' and Naomi Martin as 'Judy' wake up in bed together. Once the problems augmented Budgen's character built good levels and maintained strong energy. His accent, however, came and went more often than his character through the four doors on stage. Dale Hicks as 'Tom' the best man, played well against Budgen, but failed to reach the exasperation required to show his aggravation when he discovered the groom had slept with his girlfriend. Jamie Hibbert as 'Julie' the Chamber Maid, gave an outstanding performance delivering great comic timing and an excellent accent throughout. Wendy Mildren as 'Daphne' the Bride's mother was pleasantly absent minded, but perhaps a little too blase of the events taking place around her, and Sharon Pitardi as 'Rachel' the Bride gave a steady performance with some nice peaks as she discovered the truth of the night before,
The set design by Bruce Mildren complimented the piece excellently and the lighting design by Ray Trowbridge worked well, maintaining focus on the action without detracting from the bigger picture.
This is a joyful night of theatre, and a credit to Galleon Theatre for a great piece selection, guaranteed to be a hit with audiences.
Reviewed by Paul Rodda 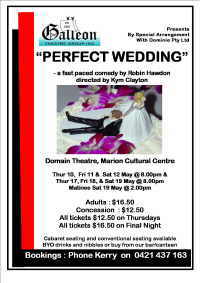 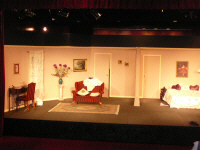