This taut and cleverly constructed drama from the acclaimed Welsh playwright affords a sensitive overview of marriage. Marcia and Ralph are preparing to celebrate their fortieth anniversary with a grand family party.

Ralph has opened a bottle of champagne while Marcia reflects on their years together, years of suffocating loneliness and frustration in a loveless marriage. She and Ralph, as they were when they are young and full of hope, are conjured from her memories.

As the hour for the party draws near, she relives the years of self deception, lies and infidelities and her anger boils over. She and Ralph fight and she resolves to leave.

But forty years is a long time, and Ralph lets slip news that shocks Marcia. What will their reaction be to each other after Ralph's shocking news? Will the anniversary go ahead ? 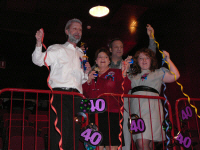 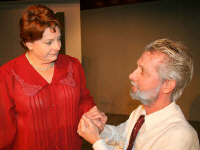 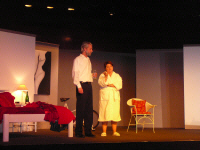 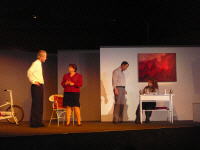 Galleon Theatre Group are celebrating forty years of theatre in Adelaide with Frank Vickery's appropriately titled "Love Forty"; the story of husband and wife Ralph and Marcia.
It is, however, far from the traditional narrative - and, despite the title, there's no tennis at all. We're introduced to present-day Marcia (Lindy Le Cornu) and husband Ralph (Andrew Clark) as they are getting ready for a quiet dinner with their daughters to celebrate their fortieth wedding anniversary. But when a bitter Marcia starts to reminisce about how the years have passed since their wedding night, we're introduced to her memories via her and Ralph's younger selves - 'Girl Marcia', (Jamie Hibbert) and 'Boy Ralph' (Jerry Zimmer).
The audience is taken on an involving and touching journey through the years, and it turns out that it hasn't always been smooth sailing for the couple, despite the milestone they're celebrating - and that the marriage itself began under less-than-ideal circumstances.
A production requiring two sets of actors to portray characters who resemble each other at different stages of their lives can sometimes lead to the sacrifice of either believability or capability, but that is certainly not the case here. Jamie Hibbert and Jerry Zimmer are both convincing and effective as the younger incarnations, and Andrew Clark exhibits a good range of emotions as the often-oblivious and sometimes deceptive Ralph. Lindy Le Cornu shines as Marcia, who combines great depth and subtlety during the more serious moments with some excellent comic timing in the lighter scenes.
Director Kym Clayton has his cast use the small space well; many of the scenes feature both the past and present versions of the couple - effectively unaware of the other, except in certain key scenes - in the room at the same time, yet it is at no point awkward or unnatural.
Likewise, the excellent dialogue - which constantly switches from present to past - is seamless and free-flowing. Ray Trowbridge's effective lighting design works well to help transition between the 'past' and 'present', as well as lending appropriate tone, while Lynda Pearl's costume design, specifically putting the 'past' incarnations in shades of grey - helps with the slightly surreal feel.
This is a good production of a clever, well-written play that examines just how much the truth - and how it's dealt with - can affect a relationship over the years.
Reviewed by Jamie Wright

Marriage is not always a happily ever after story, sometimes there are some rocky patches to traverse and these are explored in this rather uncomfortable play by Frank Vickery. Set in the bedroom of their house and on the eve of their fortieth wedding anniversary Marcia and Ralph look back on their marriage and explore some issues that they have been avoiding for years.
This story has a nice twist too as a younger Marcia and Ralph appear to play out sections of the past, dressed throughout in variations of grey.
Under the Direction of Kym Clayton this play had a very slick and polished feel to it but it did seem like the characters were very superficial at times.
Lindy Le Cornu was marvellous as 'Marcia' the embittered and cynical wife who never accepted that her marriage was good.
Andrew Clark played 'Ralph' the husband beautifully as the weak man who never worked out how to please his wife and make her really his.
As 'Young Marcia', Jamie Hibbard was cheeky and coolly confident and Jerry Zimmer was suave and amiable as the 'Young Ralph'.
The four actors were impressive together and interacted well considering the amount of time they were together on stage but ignoring each other.
The modern bedroom setting designed by Bruce Mildren and Steve Kelly was immaculate but extremely minimalist and very short on furnishings which made for some unexciting blocking. There were four wings but only two were used constantly.
Costumes designed by Lynda Pearl were nicely co-ordinated colour wise and the sound designed and operated by Sean Smith lent a pleasant ambience to the action.
Overall this production was extremely well put together but it felt a little sterile and lacking in heart.
Reviewed by Laraine Ball 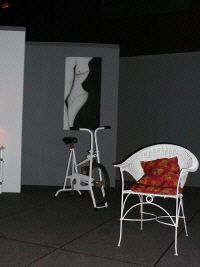