Alec's plans for an adulterous holiday in Spain with his assistant Liz, without wife Maggie getting suspicious, are thrown into disarray when Alec's mother arrives having discharged herself from her old people's home, followed in quick succession by son Jamie with a broken ankle and daughter Mandy, heavily pregnant and with no intention of matrimony. 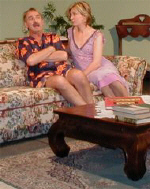 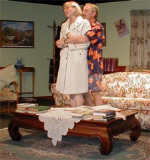 Galleon Theatre Group's latest production of "Haywire", a farcical comedy by Eric Chapell, directed by Andrew Clark, opened last night at the Domain Theatre, Marion Cultural Centre.
Opening night jitters were very much in evidence with ad libbing to cover lost lines and the odd phone ring out of context. However, having said that, the play romped along at a cracking pace. Kym Clayton, in the lead role of Alec Firth, worked extremely hard to keep lines flowing from the less experienced cast members. He played the harried would-be lothario to the hilt and portrayed his growing frustrations and frantic manipulations of the situation to perfection.
Bernadette Bycroft, who played the "other woman" looked the part and settled into the role after some initial jitters. Christine Otto, who played Alec's ditzy mother, revelled in the part and the audience loved her. Anita Canala, as Alec's wife, looked suitably down-trodden but played the part with warmth and sincerity. Anthony Clapp as Alec's injured son, played his part convincingly, taking some pretty athletic falls. Catharine Johnson, a first-timer on stage, played the part of Alec's very pregnant daughter. After some initial jitters she settled into the role and was convincingly "pregnant".
Andrew Clark is to be congratulated on this production. The cast looked comfortable and moved well on stage. The set suited the action of the play and was well dressed.
In all, if you are looking for a good laugh and a rollicking night out, then Haywire would be an excellent choice.
Reviewed by WENDY MILDREN

ALEX Firth is an unlikely lover. He owns a bookshop, a dowdy wife, a shiftless son, an ungrateful daughter, an unloving mother and a flea-ridden puppy. All he really wants is a dirty long weekend in Spain with his sexy assistant, Liz (saucily played by Bernadette Bycroft).
Director Andrew Clark has gathered together a capable group of actors for this piece of typical English comedy and moves them well in the nice big lounge-room box set.
Kym Clayton (as Alex) carries the bulk of the dialogue and delivers many a quick quip with great dexterity. Alex is a seemingly heartless and insincere twerp, saved only from being completely despicable by a nervousness that Clayton portrays well.
Anita Canala as Alex's wife, Maggie, is a good contrast. Her complete stillness is a foil for Clayton's sometimes frantic movement. But Maggie needs an inner strength that is lacking in Canala's performance.
The play starts slowly and there is some stumbling over lines but once Alex's son (Anthony Clapp) enters the story, the comfortable father-and-son rapport provides the first real laughs of the performance and settles the show. In his effort to convey the immaturity of his character, Clapp plays the conniving son a little too "cute" but he has excellent comedic ability and makes the most of every opportunity for a laugh in his supporting role.
Christine Otto has the plum role of Alex's witch of a mother. She does a good job but misses the opportunity to be really evil, ancient and disgusting; she's a little too nice.
As the final piece of this family puzzle, first timer Catharine Johnson proves very able as an extremely pregnant, unmarried daughter.
The sketchy plot is an excuse for some funny antics and family feeling and there is an underlying pathos that is very British. This light hearted look at human frailties has a warmth that is very welcome on a chilly night and, despite a few glitches, this is an enjoyable production.
Reviewed by SUE OLDKNOW 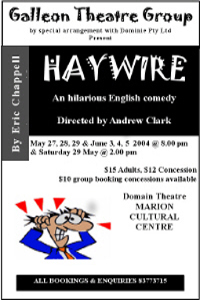