Written by Peter Coke and directed by Wendy Mildren, Fool's Paradise is the tale of two women, Catherine and Jane, who have both been married to the same man at different times. Upon his death, he leaves them both his large manor house in the hope that they will drive each other mad. Although the house is wonderful and filled with beautiful antiques, the conditions of the will do not allow for them to be sold. Catherine and Jane dream up many desperate ways of finding money in order to maintain the house and pay their bills.

THIS is one of those lovely little English situation comedies where you don't know whether to laugh or to cry.
PLAYS like this rather quaint English comedy are really a product of their time - with nothing to offend anybody to the point of being rather bland and, in this case, rather silly.
That is not to say Peter Coke's late 1950s script, about a man's first and second widows stuck sharing the house he left them, should not be entertaining. It certainly is. But it could be even more so would the actors speed up their cues.
First-time director Wendy Mildren has done a workmanlike job, with the action well blocked and an attractive drawing-room set decorated with handsome furniture. But the farce-like plot has to move at a galloping pace to cover up the credibility gaps.
Trish Phillips and Louise Feetham make a pretty good pair as the two Mrs Haylings, responsible Catherine and giddy Jane, respectively, who are living in debt and unable to sell anything in the house under the terms of the late Basil's will. Basil's late sister has just left them a spray of emeralds and, if they prove valuable, all their outstanding bills could be paid.
Unfortunately, Jane accepts deposits on the jewels from too many people and can only hold a greedy antiques dealer (a convincingly cunning Jeff Phillips) at bay by inventing an exotic third owner for them - whom she then impersonates.
As debts increase, she even accepts a deposit on Catherine's son Philip (Matthew Meakins), rashly romising his hand in marriage to glamorous and enamoured Fiona Renshaw (Karal Zimmerman). But the easygoing Philip is already secretly attached to a young female lodger (Fiona Sanders).
Leanne Robinson plays an eccentric, turban-wearing rich woman who also holds out some hope to the financially troubled widows. If only their belligerent, forgetful old maid (Christine Otto) would do as she is told.
And they spend some merry moments trying to solve an almost inextricable tangle.
Fool's Paradise is easygoing entertainment, and patrons have the choice of cabaret tables or raked seating, but I'd like to see the pace pick up considerably before offering a full recommendation.
Abridged version of this review published in the Guardian Messenger, 17-9-3, p. 47.
Reviewed by NICK CARROLL 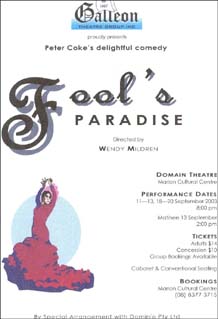