Written by Stephen Metcalfe, EMILY is a brilliant comedy that asks the question: does success mean singlehood ?
Emily is a stockbroker who mixes it up with the boys and always seems to comes out in front. She is as cynical and ruthless as any man in her position until she meets John, a caring, sensitive actor who sees beneath her career focused exterior. This nice guy with no money sees the real Emily inside the ruthless yuppie and a touching and amusing lesson is learnt about life and love.
In 2014 Galleon produced LOVES AND HOURS , another play by Stephen Metcalfe , and as well as being hugely successful, received a nomination for Best Comedy in the annual Adelaide Theatre Guide Awards. 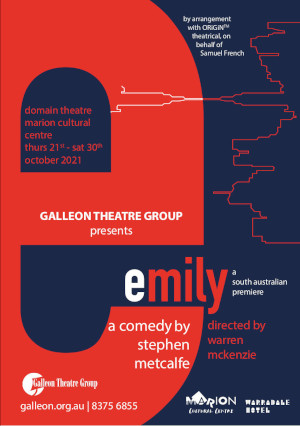