In a stylish converted French farmhouse, Bernard is hoping to entertain his chic, Parisian mistress, Suzy, for the weekend. He has arranged to send his wife, Jacqueline, off to her mother and has even invited along his best friend, Robert as a suitable alibi. It's foolproof. What could possibly go wrong?
Well supposing Robert turns up without knowing the real reason why he's been invited? What if Robert and Jacqueline are secret lovers? Or how about the cordon bleu cook that Bernard has hired to provide gourmet delights, being mistaken for the mistress and the mistress who can't cook? Mix these ingredients and you have the perfect recipe for an evening of hilarious confusion as Bernard and Robert improvise at breakneck speed.
Don't Dress for Dinner was a smash-hit in Paris under its original title Pyjamas pour Six, where it ran for over two years. Robin Hawdon's English adaptation played to critical acclaim in London in 1991.
'Hurtling along at the speed of light, Marc Camoletti's breathtaking farce is a near faultless piece of theatrical invention. Within seconds we are drawn into a delicious web of marital treachery which accelerates with classic symmetry for an all-star denouement.' The Guardian
'... a nifty comedy farce about double adultery and gourmet cooking ... I can't think of a better way of forgetting the recession.' Sunday Times 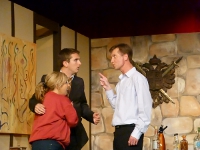 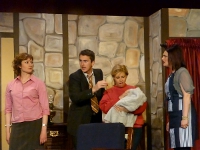 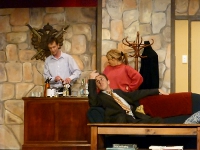 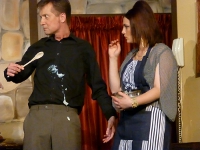 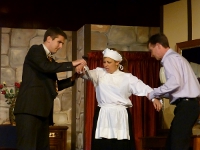 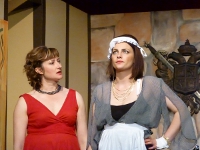 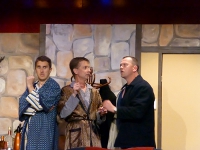 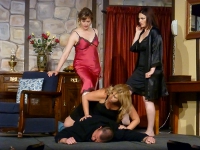 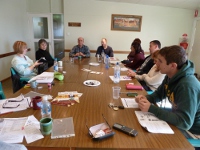 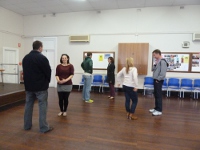 I must admit I like a good farce, and that is exactly what this is - a good farce. The action is fast paced, the dialogue witty and the set works well.
The play is set in a converted farmhouse outside Paris, and the design is stylish and practical enabling the action to be fast and funny. Andrew Clark uses all his talent for comic timing as Bernard trying to arrange a naughty weekend with his mistress. Clark is well cast and remains believable in unbelievable situations. As his "loving wife" Jacqueline, Nicole Rutty is planning her own dalliance. She plays the role, well switching from suspicious wife to outraged lover and holding her own though out.
The 'best friend/wife's lover' is played suavely by Mason Willis, who is all things to everyone and tries to keep everyone happy. Willis has a talent for comedy and his diction is superb; his fast paced explanation speech in Act 2 was not only great but also understandable! As the mistress (with the fur coat) Olivia Eblen does reasonably well but lacks the stage presence required for this part; she could have done so much more.
The cook-turned-mistress-turned-niece, played by Lana Adamuszek, is hilarious. Adamuszek uses every device to play for laughs and works extremely well with Willis in their scenes to achieve maximum amusement. Her scenes with both Clark and Willis are a highlight. As her husband, George, Stephen Small plays his minor part very big!
Director John Graham has created a fun production and got the best from his cast and the opening night audience certainly appreciated their hard work. Worth seeing, book a ticket soon.
Reviewed by Fran Edwards

Galleon are on a real winner with this French farce, written by Marc Camoletti and adapted by Robin Hawdon.
The setting is a property, a stylish barn conversion, in the countryside outside Paris, owned by a seemingly happy and financially comfortable young couple. We are in a smart, modern living area, with bedrooms either side downstage, an exit to the kitchen upstage one side, and a staircase to the upstairs bedrooms upstage on the other, with the front door upstage centre. Any good farce needs plenty of points of access.
Bernard's wife, Jacqueline, is planning a weekend visit to her mother. Bernard is planning a dirty weekend with his mistress, Suzanne. His friend Robert has just returned from a business trip and Bernard has invited him for the weekend to act as an alibi if needed. He has also hired a cook, Suzette, for the evening from a local catering agency. All is set and nothing can go wrong; or can it? Jacqueline discovers that Robert is coming for the weekend. She promptly cancels her trip, since he is her secret lover and she wants to engage in some extra-marital fun and games behind Bernard's back.
Bernard and Jacqueline go shopping for ingredients for dinner and Bernard instructs Robert to greet his lover, Suzy, when she arrives, and to then pretend that she is his girlfriend, something Robert definitely does not want to do as he wants to be free to chase Jacqueline. With the cook on the scene as well, and everybody keeping secrets and pretending that their various relationships are other than what they really are, mayhem ensues. No wonder the cook's husband, George, is confused, when he arrives to collect her after dinner.
Director, John Graham, has assembled a fine cast and together they have developed a cohesive approach to the production based on some superb characterisations. It is all too easy to overplay a farce aiming for cheap laughs and, sadly, few directors ever realise that by treating it with the same way as a drama, creating three-dimensional characters and allowing the laughs to come naturally. Graham obviously understands this and has not fallen into that trap, resulting in a genuinely funny production.
Andrew Clark and Nicole Rutty are ideally cast as Bernard and Jacqueline. They have an excellent rapport, convincing as an established couple, and with some great interplay as the lies and mistaken identities compound and they find themselves bemused, confused, jealous, frantic, and furious as events unfold. They give us a long string of hysterical moments as they each try to hide their affairs from the other.
Mason Willis plays the reluctantly involved Robert, adding another convincing performances as the 'piggy in the middle' of the machinations of Bernard, Jacqueline, and Suzanne, while trying to get what he wants as well. He shows us the hilarity in his torment from trying to help his friend hide his affair, while also trying to maintain his own.
Lana Adamuszek plays Suzette, the Cordon Bleu chef, investing her character with all the craftiness and cheekiness required, catching on instantly to the financial opportunities made available to her by conniving with the philanderers. She gives a lively performance filled with youthful energy and a great sense of playfulness. Olivia Eblen takes on the role of Suzanne, a Parisian model, bringing a nice touch of style and elegance to her character. Eblen gives her character an air of growing frustration as her night of passion with Bernard seems to be continually looking less likely then, taking a pragmatic approach to the problem, begins to consider other options, turning on the seduction so as not to waste a weekend. Eblen gives Suzanne good blend of sexy with class. Stephen Small appears as Suzette's jealous and protective husband, George, a solid mass of muscle ready to thump first and talk later where the fidelity of his wife is concerned. Small makes his brief appearance count, generating another batch of laughs as they others try to explain things to his satisfaction.
If you need a good belly laugh, these chaotic attempts to maintain the status quo in the face of ever increasing holes appearing in the fabrications, is just what you are looking for. Don't delay, as the venue has limited capacity, and this group always attract large audiences.
You have a choice of conventional theatre seating, or you can take a supper and sit at a table, so let them know your preference when you book.
Reviewed by Barry Lenny October 2012

Galleon Players' final offering for this year is a deft, very funny but quite fatuous play.(and aren't all farces fatuous?) But director John Graham knows farce and how they should be played.
To quote Mr Graham in part"... the plot is about adultery, mistaken identity, romance, jealousy, confusion and brilliant one- liners." His production embodies all of these elements in spades. Graham has melded his excellent cast into a tight ensemble and the pace is a cracker from the get-go. This gives the audience no time to realise how crazy the plot really is. The set, a renovated barn somewhere near Paris, is tastefully decorated and spacious enough to allow for all the hi-jinx that ensue throughout the evening. As the conniving husband Bernard, looking for a weekend of lust while his wife is supposedly visiting her mother, Andrew Clark is uproariously non-plussed by the events of the evening. Clark's comic timing is a feature. His wife Jacqueline, is played by experienced Nicole Rutty who is in complete command of her role despite the recent development of some slightly bothersome mannerisms. Mason Willis made a dashing paramour for Jacqueline and his "double -talk" speech in Act 2 is a gem which brought the house down. Lana Adamuszek as Suzette the cook(or was it the mistress or maybe the niece) was a huge hit with the audience, showing a fine sense of comic action. Her "undressing" scene in Act2 was a clever bit of stage business. Olivia Eblen was an attractive "Susanne" but perhaps did not make the most of her opportunities. Suzette's husband George, Stephen Small, played his cameo role with marvellously comic pretend aggression and the audience could be forgiven for thinking they may have been seeing Shane Jacobsen .
Another excellent production for Galleon Theatre Group.
Reviewed by Richard Lane October 2012 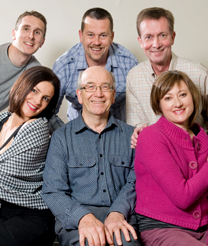