This production explores the confusion and problem which occurs when an ex boyfriend arrives for a candle light dinner with Felicity, on a night when her husband is out of town, trying to pacify a temperamental tennis star.

NICK Enright's delightful play is ironically playing on the same two weekends on which the play is set. The Australian playwright may be best known for co-writing the screenplay for the film Lorenzo's Oil, and for his writing on the ABC TV's Come in Spinner.
His comedy Daylight Saving is set in a northern shore suburb of Sydney where, caught in an unhappy marriage, Felicity spends her wedding anniversary with an old high school flame while her husband is away for work. The former lovers attempt to rekindle their romance but, as with all good comedies, nothing goes quite to plan.
As Felicity's husband and powerhouse international tennis coach, John Adam is surprisingly lethargic.
Alongside him, Bronwyn Ruciak over-compensates initially to keep the energy levels up as his tormented wife.
But once Adams is off stage, she settles into a great performance and the show's pace picks up.
Clay Fraser's womanising gigolo is a lot of fun, but it is Margaretha Mooney who steals the show as the self-involved neighbour with no tact. Mooney's entrance rockets the play to new heights and keeps it at that level for most of the night.
Tim Sydenham has the spoiled brat routine down pat as young tennis pro Jason, and Louise Feetham, while needing to be tighter with lines, is nonetheless delightful as Felicity's interfering mother.
Kym Clayton's capable direction keeps the action moving, making good use of the pristine set which is well suited to the lifestyle of the characters. But with his attention to minor details, the sound effects are surprisingly disappointing. The telephone rings American style, a mobile phone rings like an Australian land line, and the sound of possums on the roof is spoiled by tape hiss.
Despite the minor annoyances, Daylight Saving is a very funny romp that avoids the antics of farce. Abridged version of this review published in the Guardian Messenger, 26-3-3, p. 40 by NICK CARROLL
Reviewed by ROD LEWIS 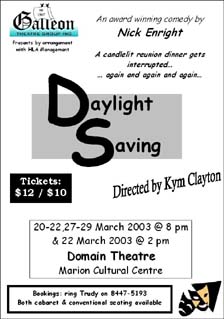