DIRECTOR Trudy Pearce writes in her program notes that this 1970s "women's liberation" piece by Leonard Radic is still relevant today.
While that may be so in theory, it is difficult to empathise with Anna Cody (Bronwyn Ruciak) as she rails against her 20-year marriage to Maurice, an eminent high court judge, casting herself as the accused in an imaginary trial. In a minimal setting, Ruciak carries the bulk of the intelligent dialogue as she pours forth a bitter stream of invective against what her husband has made her become through years of clever put-downs.
It is difficult to find what the author - a man - is really trying to say about the character. Is Anna an ungrateful, bitter and twisted woman, already doomed to fail in life and using her long-suffering husband as an excuse? Or has she truly been driven mad by years of emotional abuse?
Ruciak delivers the lines fluently and with feeling but there is a lack of lightness and the moments of sympathy for her character are rare. The fact that she looks too young for the role compared to other cast members could be easily fixed with adjustments to hair and makeup. Most of the time Anna is kept rooted to the spot delivering long and complex monologues. When the character is allowed to move, she shines.
Scene-changes into Anna's memories could be quicker and more dreamlike. Blackouts to set them up are unnecessary and break the mood, but otherwise this intricate piece runs smoothly.
Anna's husband, Maurice (Terry McCoy) is appropriately maddeningly calm and patronising. McCoy realises the character well despite occasionally searching for lines. Jerry Zimmer, as the featureless Simon, and Tracy Wilson, as his pretty, amenable wife Vickie, tackle their supporting roles well.
Dan Hynes handles three small roles very well. His scene as a low-brow painter of nudes is extremely good and comes as a welcome relief from the heaviness of the text.
This Australian play is not altogether satisfying, but it is interesting, open-ended and intelligent with enough left unsaid to keep you thinking after the curtain closes. 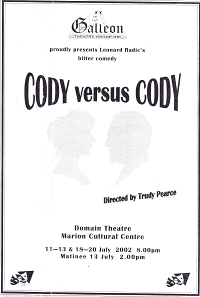