In this stylish entertaining comedy, Julian a dentist, finds dating is easier if he pretends to be "married". His young lover Toni, after some time of dating is convinced the two have no future together, attempts suicide, and a guilt-ridden Julian rashly proposes he leave his "wife" so the couple can be together.
Toni refuses to break up his household without first meeting and talking with Julian's soon-to-be-ex, so Julian enlists the aid of his shy spinster assistant Stephanie to pose as his non-existent wife.
Complications arise when Toni decides the two must find her a new beau so everyone concerned can live happily ever after. 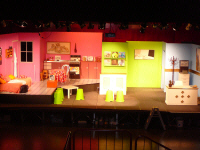 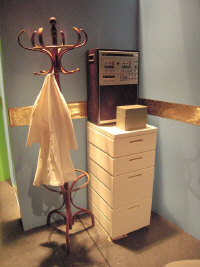 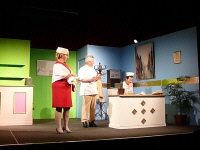 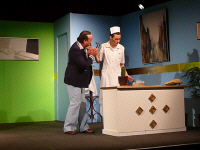 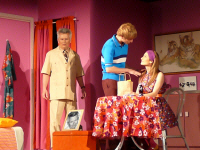 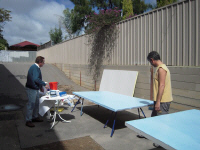 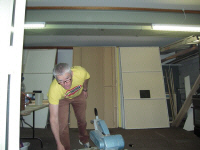 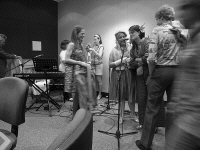 Galleon Theatre Group's latest production proves that Abe Burrow's "Cactus Flower" hasn't wilted. Director Jerry Zimmer holds a steady course and has the entire crew sailing on the right heading in this quaint romantic comedy. Boosted by some great puns and a couple of solid performances, this affable farce has a certain charm. It does what it sets out to do - make its audience chuckle - so for what it is, it's a big success that captures the quirkiness of the 1970's.
Despite sometimes lacking true momentum, the enthusiastic cast, aided by a marvellous script, provide a pretty decent piece of entertainment with more hits than misses. Overall, it's a sweet and pretty fun ride that doesn't always fulfil its ambitions. Yet it's a diverting and humorous work that deserves attention.
In the opening scene, a young woman named Toni is draped over a bed. Her neighbour smells gas and breaks into her New York apartment. From here the plot is contrived and predictable - but who cares? It's funny! The story revolves around the unlikely relationship between a young, ditzy woman named Toni and her much older lover, Julian, a dentist. Toni believes he's married with children, but in fact, he's a philanderer who tells women he's attached to avoid getting too involved. When Toni attempts suicide, Julian decides to marry her. However, Toni wants to meet his wife first. So he coerces his strong-willed receptionist, Stephanie Dickinson, to masquerade as his spouse. Much to his dismay, Stephanie causes him even more complications as one elaborate lie follows another.
The stage is split into two, the first representing Toni's apartment, and the other Julian's surgery. Centre stage hosts a record shop and a night club and all look appropriately groovy for the period. Andrea Brook's splendid costuming works extremely well with the set to create the right atmosphere. Naomi Martin is effective as Toni, Jack Robbins warms into the role of Dr Julian Winston, Lana Adamuszek (Mrs Durrant) does a comedic vamp to near perfection and Fiona Lardner is impressive as Stephanie who blooms from a prickly nurse into a delectable woman.
Ultimately, "Cactus Flower" is good old-fashioned fun.
Reviewed by Stephen Davenport

Galleon Theatre poduction of the time-honoured comedy Cactus Flower at the Marion Cultural Centre is an absolute gem! Fiona Lardner in the Ingrid Bergmann nurse's role, gives another of the year's finest amateur perfomances along side Jack Robins' romantically befuddled dentist, whose life seems permanently in tatters.
Equally, it's the beautiful writing, and fast paced direction of Jerry Zimmer, that elicits so much hilarious romantic undercurrent and misunderstanding.
It's also well staged, with excellent scene bridging music, sound and lighting. Bravo all! Such a fine production should be embracing a brief country tour.
Reviewed by John Ovenden
================================================== -->