If you are an actor or indeed have ever worked in theatre you will be able to relate to this clever piece. Developed for the Edinburgh Fringe Festival in 1995, it is good to see groups trying more progressive works.
Unfortunately the content of "Bums on Seats", particularly the coarse language, has had to be understandably modified to suit a conservative audience, which leaves it with a watered down feel. Even so, it is a witty, well written piece of theatre, creditably performed by the Galleon cast and crew. Director, Trudy Pearce, has gone for an interesting mix of laid-back natural performance and over-the-top melodramatics. Stage Manager, Karen Winston, starts the show off with some light and sound checks, looking totally at ease in front of an audience, and you are into that strange state of watching a play front and back. The Usherettes keep things rolling as the out-of work actors (sorry, resting artistes) making ends meet working Front of House in the Theatre Royal where the controversial play "Fecund" is running (heavily funded by the local council). Sharmila James and Nyssa Williams are the gushing, touchy-feely "oh, the magic of the theatre" Usherettes, kept in balance by the world weary Wendy, played with precise delivery and dry wit by Cathryn Lever. James and Williams have great exuberance but need to watch their volume and diction as a lot of what they say is lost. Trish Phillips plays Estelle, the voice of sanity in an insane world, and plays it well. She is a particularly good foil for Paul Morton as Benedict Thrush "an actor" in my favourite scene, where Thrush is helping Estelle rehearse her tour speech in a classic "what is my motivation" marathon. Morton is very good and very believable. New to the Adelaide drama scene, and indeed new to the country, I am sure we'll see a lot of him in future productions. Two weeks ago this play was nearly cancelled as actors were dropping like flies. But troupers that amateur thespians are, the show went on, with the director in two roles and actors Tom Anderson and Garth Robson coming in at the last moment. To the rescue! Pearce does a great job as Mo, the Chief Stage Manager. She has a nice, relaxed style that works well for that role. Her Zara Roscoff "an actress" needs a lot more 'oomph' however. She needs to inject a lot more ego into Zara. Ken Callis was called in to choreograph a small opening piece for the play and stayed to play Zara's husband. Their scene together is amusing but should have a lot more fire . After all, this is two actors we're talking about. The arguing stops only to smile for the cameras. The perfect media marriage. Jeff Phillips makes a very enjoyable dissolute playwright, bottle in hand and mind in the bedroom, and Helen Darlington, Mary Cummins and Christine Otto complete this stoic ensemble. The pace isn't perfect, it feels unbalanced and unfinished in sections and the "disinfecting" could do with a rethink as the poor actors on stage don't stand a chance against the upstaging going on among the audience. But "Bums on Seats" is great fun and very close to home if you love theatre. The pretension, the egos, the bravado and the vulnerability of those who chose to live in the land of make-believe is lovingly lampooned. And well done to Galleon for once again proving that life is as strange as fiction and that the reassuring cliche, "It'll be right on the night.", is somehow always true
Reviewed by SUE OLDKNOW

THERE are some shows that amateur companies should steer clear of and Michael Snelgrove's theatre anatomy piece, Bum on Seats, is one of them.
Reviewed by MATT BYRNE 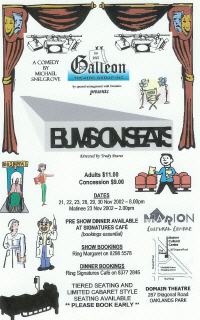