An apartment room in New York City.
Lee Schallert, a young, assertive housewife, feels she may be missing out on something according to Time and Newsweek. She decides to leave her husband Bob and her eight bedroom suburban home in Westchester, to move into a one and three quarter room Greenwich Village apartment with two room mates.
This comes as a complete surprise to Bob, the straight laced, hard working "old school" husband, who has to use his quick wit to attempt to win back his "little woman" and return life to "normal".
Lee's first roommate, Pat, is an aspiring actress who hides behind a myriad of characters and costumes, ranging from Shirley Temple, to Marlene Dietrich and Scarlett O'Hara. Why does she hide behind these different masks and does she reveal her true self in the end?
Her other roommate is Tracy Varetta, and though expecting a female, through an agency mix up, the other roommate is male. Tracy is a young graduate psychology student who enjoys walking and dreams about becoming a research psychologist, meeting a nice plain girl with glasses and a plaid skirt!
Through drawing straws, double dates, subterfuge, dripping faucets, alcohol and a kiss, Accommodations is an amusing study of marital and human relations through the eyes of four characters. A witty comedy that explores the things we look for in life; goals, love, stability and a sense of purpose.
"An amusing study of marital and human relations. . . . A gem." Labor Herald.
"The audience laughed until it hurt." News American.
"Superior theatre.... It is light comedy at its best." The Sun, Baltimore. 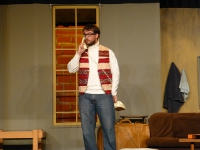 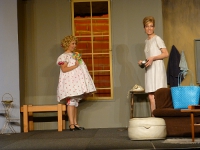 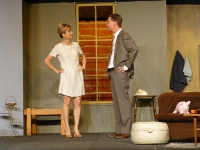 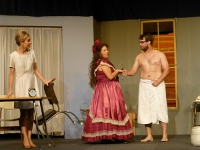 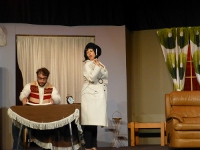 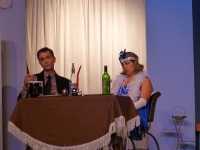 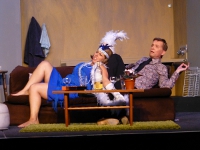 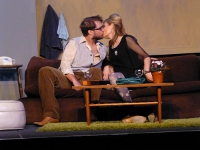 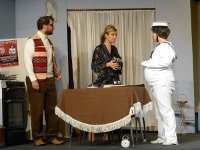 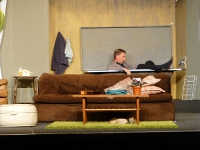 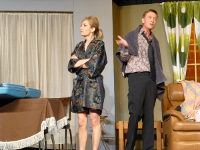 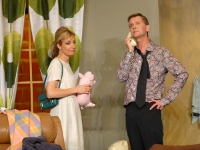 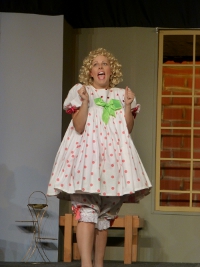 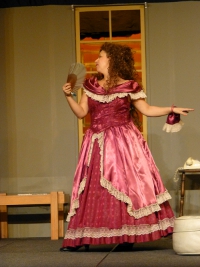 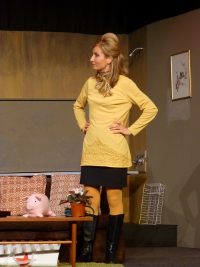 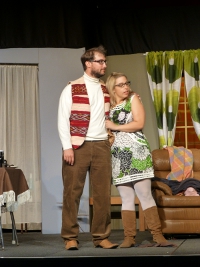 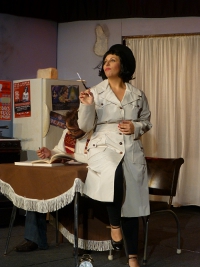 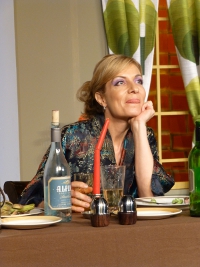 Nick Hall's play is unfortunately showing its age with the central theme of female emancipation versus male chauvinist expectation a little too 70s American. That said, the script does provide some laughs and the cast of four make the most of their opportunities.
Lee (Anita Canala) has left her husband because he doesn't treat her as a person. She leaves her comfortable home in Westchester to move into a run down, one-bedroom apartment in Greenwich Village with Tracy (Luke Budgen) and Pat (Lana Adamuszak), two people she has never met. Of course her husband Bob (Andrew Clark) arrives on the scene to take her home and the usual confusion reigns.
Luke Budgen does a nice line in "dry" and probably has the hardest job to create a credible character for Tracy. If anything he tends to underplay. He makes a good straight foil though for Lana Adamuszek's wacky aspiring actress whose succession of character costume changes provides plenty of opportunity to ham it up.
Anita Canala delivers a very likeable Lee and looks a million dollars. She also coped well with a malfunctioning prop.
Andrew Clark makes a banquet of Bob whose behaviour would make any woman leave him, but then this is America. He is blessed with excellent comic timing and the other players would do well to learn how he milks a line.
Warren McKenzie keeps the action humming along but it's a pity he wasted a good cast on material that's past its use-by date.
Reviewed by Tony Busch

What accommodations are you willing to make for the one you love without compromising your pride? Galleon's production of Nick Hall's "Accommodations" directed by Warren McKenzie poses this question set against the backdrop of the vibrant 1960s; where women were beginning to assert themselves and realising they could be anything and anyone they wanted to be, not just someone's wife.
Desperate housewife Lee (Anita Canala) is tired of picking up socks and being taken for granted by her chauvinistic husband Bob (Andrew Clark). In an attempt to make her husband appreciate her as a woman, Lee leaves her comfortable house and moves into a shared rundown one bedroom apartment with two new roommates. Canala is a wonderful combination of demure and assertive allowing the sparks to fly in her interactions with Clark. Clark is at his comic best as he sinks into drunkenness on the worst first date ever with Lee's roommate Pat (Lana Adamusek), a chameleon actress who changes personas with every costume change - everything from Shirley Temple to Russian spy! Pat turns her affections to earnest psychology student Tracy (Luke Budgen), whose name provides much comedy and confusion in the early moments of the play. Budgen's portrayal of the honest, centred, voice of reason Tracy provides a welcome contrast to the three more animated characters. Adamusek takes us on a hilarious melodramatic journey of self-discovery as her exuberant flirtations with Tracy are resisted suggesting that the only person any woman really needs to be is herself.
The single box set provides clever entrances and exits worthy of a French farce. Sean Smith weaves iconic sounds of the 60s through the scene changes which, despite being a little on the long side, allow for the occasional sing-a-long.
Make some accommodations in your busy schedule and get out to see this show!
Reviewed by Aldo Longobardi March 2013

Accommodations , written by Nick Hall and directed by Warren McKenzie, is a funny, witty comedy set in America at a time when women were really starting to assert their independence in life, work and marriage.
The four characters, Lee, Pat, Tracy and Bob, come together after Lee, played by Anita Canala, leaves her husband Bob (Andrew Clark) after feeling unappreciated and ignored in their marriage. Lee flees her stable middle class suburban life and lands in a rundown Manhattan apartment with young, larger than life aspiring actress Pat, and Tracy a male (!) psychology student played by Luke Budgen.
The entire cast do a great job of delivering one liners poking fun at themselves and each other, and give us a good sense of where they are at in life and where they want to be. Pat, played by Lana Adamuszek, delights the audience with her rotating wardrobe and persona to match. Her energy on stage is infectious. Luke Budgen looked comfortable in his role as a sensible and thoughtful young man, and reminds us that simplicity and the honest truth are usually best.
Anita Canala and Andrew Clark have fun with their characters and give us some food for thought as their relationship is laid bare.
The set and lighting were effective, and the brief moments of music were great, even rousing a sing-along from some of the audience at one point!
You are immediately made to feel welcome by the front of house volunteers, who offer you a complimentary sherry before the start of the show. There is a real community feel which is fantastic. Book with a group and take advantage of the cabaret style seating in front, or you can opt for the tiered theatre seating at the back. Make an evening of it, have some laughs and enjoy the show!
Reviewed by Kat Noble March 7th 2013 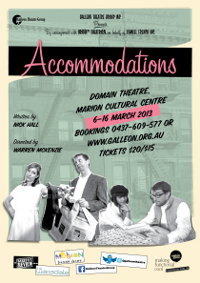 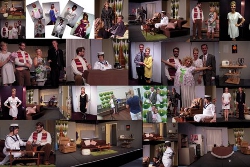 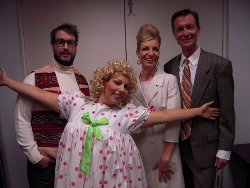