This is the tale of a series of dinner disasters, maddening mishaps, and social catastrophes replace the usual carolers, candy canes, and cheery family gatherings associated with Christmas time in Sir Alan Ayckbourns' "Absurd Person Singular". In this wacky British Comedy, we meet three couples who meet on three successive Christmas Eves to struggle amongst themselves to save face and their places on the social ladder.

A first-class British comedy script provides the basis for a good production? Not always, but it certainly does for Galleon Theatre's "Absurd Person Singular".
Director Margaret Dixon has taken a great script, a cast of six excellent actors and a simple and effective set to provide a great night's entertainment.
Alan Ayckbourn's script from the 1970s is a little dated but very witty as the foibles of three married couples are ruthlessly exposed in three separate Christmas Eve parties.
The first act is a scene setter, the second act is a scene-stealer and the third is just plain silly - and lots of fun.
In the first act young couple Sidney and Jane Hopcroft (Andrew Clark and Kerry Cooper) decide to entertain with a Christmas Eve party for carefully selected guests. Follow-up parties result in the next two acts.
The clever twist is that this play is set in the kitchen for each party. The social façade is stripped and warts and all revealed in the intimate setting of the kitchen, while the party limps along in the neighbouring rooms. The results are hilarious, even in their darkest moments.
Joanne St Clair is delicious as the drunken, malicious Marion Brewster-Wright who slips easily from shallow small talk to malicious cracks. Jack Robins also provides a strong performance as her husband, Ronald. His "electric shock" sequence is one of the hilarious highlights of many during the night.
Some of the more poignant moments, and yet still shockingly humorous, are provided by young actors George Benders and Hannah Wooller as Geoffrey and Eve Jackson. It is a testament to these actors' skill that the pathos and humour are both so powerfully conveyed.
Andrew Clark and Kerry Cooper are given the challenging task of playing the unpopular and shallow couple Sidney and Jane Hopcroft. They cleverly convey an awkward sweetness that adds to the joie de vivre of this production.
The set is simple, cleverly doing its job of adding to the characterization and action.
Galleon Theatre Group is sailing home with a winner with this Ayckbourne seventies classic at the Marion Culture Centre. Please note that audience members can sit in cabaret style tables at the front of the theatre or choose to sit in rows at the back.
Reviewed by STEPHANIE JOHNSON

Despite generating big laughs, this is no lightweight play. Darker than the average kitchen sink drama, Alan Ayckbourn's three-act seventies comedy is an inspired look at matrimonial failure and social climbing.
Set in the kitchens of three couples taking turns to host Christmas drinks over successive years, it is more farcical and desolate than other Ayckbourn comedies.
Director Margaret Dixon does a fine job with a challenging play.
Most notable in her excellent cast are the lanky Andrew Clark as the up-and-coming builder Sidney, whose wife Jane (Kerry Cooper) is a ridiculously compulsive cleaner.
Joanne St Clair is superbly theatrical as the alcoholic Marion, wife of a hopelessly obtuse banker (Jack Robins).
And Hannah Wooller is the picture of despair as the suicidal wife of the philandering architect (George Blanders).
The garish seventies set design by Stan Fairfield and Max Bowden is another big star of the show.
Reviewed by NICK CARROLL 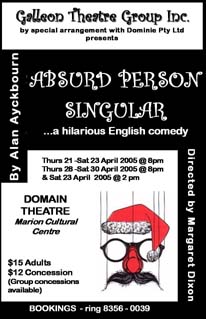