A Night On The Tiles

A highly comical and well-observed play following the nightmare of Gareth and Shirley's wedding day. Gareth, egged on by good-looking brother Kenneth, has a post-stag-night hangover so bad that he can barely speak, the bride is three months pregnant and Grandad, confused after getting stuck in the outside loo,is unsure who is marrying whom! Things do not improve after the wedding when Gareth overhears his bride getting rather intimate with Kenneth (apparently not for the first time). Over the next few months relations are somewhat strained between Gareth, Shirley and Kenneth, until on the night the baby is born, Kenneth overhears something which will shatter his life. 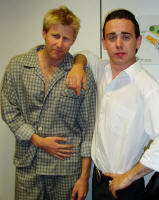 It seems that everyone has their little secrets in this amusing play by Frank Vickery, which highlights some of the many facets of family dynamics.
Doris and Reg have two sons Gareth and Kenneth. Gareth is marrying Shirley who is pregnant. However in the past Shirley and Kenneth had a drunken fling and Shirley is unsure just which of the brothers is actually the father of her child. The situation is awkward as they all share a house together along with Doris's father who gets everything confused.
A Director's vision is important and first timer Damien White has 'Realism in an Australian setting' as his goal but how this was to have been achieved with a British play by a Welsh author is somewhat ambiguous. What has emerged is a British comedy on a British looking set, just minus the accents.
In spite of being made up older Nikki Francis as Doris is a youngish, active, overbearing mother. Kym Clayton as her husband Reg is the typical quiet father.
Ryan Pick as Kenneth, takes pleasure in his rebel guise energetic and sultry he is cheeky and shows great comic timing. One of the funniest scenes shows him in the throes of 'sympathetic labour' with Shirley.
First timer Dale Hicks makes an agreeable Gareth, the steady hard working brother. His hesitant style will improve as his confidence increases and Hannah Wooller as Shirley is excellent as she rides an emotional see saw between the brothers, one she wants and one she needs.
Keith Manson goes right over the top as Grandad. Made up to look seventy he capers around the stage like a demented Benny Hill and is anything but realistic, however he does get lots of laughs. Mrs Morris is played by Judy Rogers and is just right, as a gossipy nosey neighbour.
The set, a tidy backyard complete with outside dunny is well constructed but seems a little too pristine, and there is no washing line.
Ray Trowbridge's lighting needs some work being very uneven. This is especially obvious during the day scenes. Night scenes look fine though no lights on the back porch or in the 'dunny' is highly unlikely.
The story itself ends very abruptly leaving the audience to draw its own conclusions, but all in all quite an entertaining and humorous production. 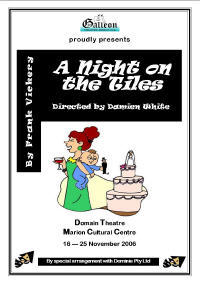 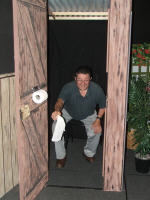 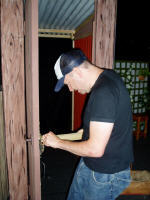